The assemblage surfaced in Spring 2008, when Stavros Amanakis, then a care taker of the Villa Ariadne for the Greek Archaeological Service, discovered a small number of WWII era artifacts, unearthed by his dog in the yard of the complex.

Stavros collected the items, identifying them as the remains of the contents of a German WWII tunic. The assemblage was partially documented in a series of photographs taken at 2008. It contained the following: 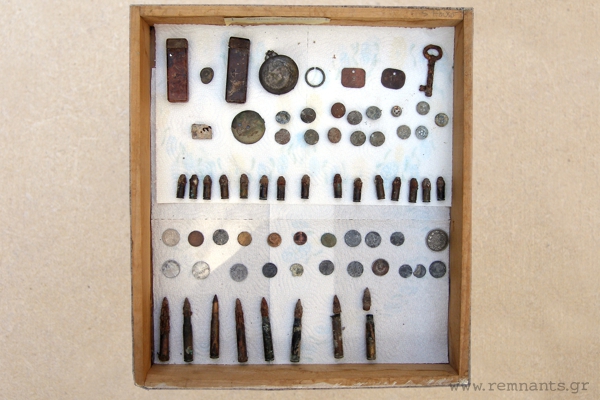 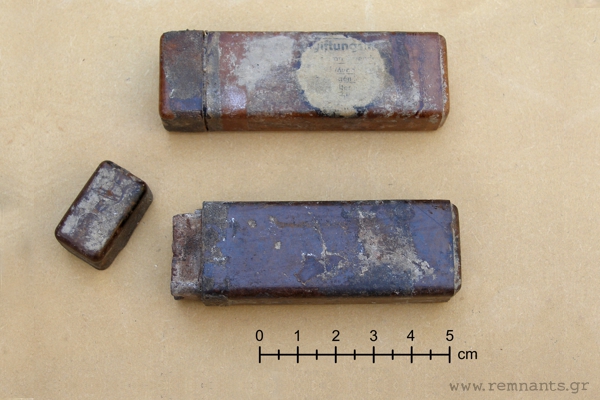 Each box contained originally 10 tablets (today they have melted into one solid powder like substance). They were a decontamination agent indented to be used in case of skin exposure to mustard gas. Tablets had to be mixed with water and be applied to the infected area.

The containers were made of bakelite, black or brown. There was a sticker on each wide surface. On the cap two stamps denote manufacturer and year of issue. An unused sealed container had a colored tape wrapped around the cap rim.

According to regulations, every soldier was issued with 4 boxes and had to carry them in the left tunic breast pocket at all times. Losantin was issued each year, up to 1943. In 1944 it got replaced by a new decontamination kit. 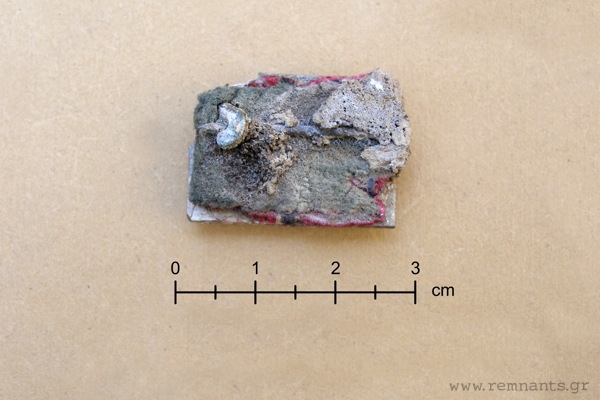 The pin-like artifact is what is left of a ribbon bar. Ribbon bars are small size military decorations, usually pinned above left tunic breast pocket, which represented medals or awards of the wearer.

Ribbon colors (traces of which are still visible) indicate that this particular one is a bar for the Ostmedaille (or Medaille Winterschlacht Im Osten 1941/42).

The “East Medal” was awarded to German personnel that fought on the Eastern Front during the winter of 1941/42. It is relatively common, since some 3 million of them were awarded. 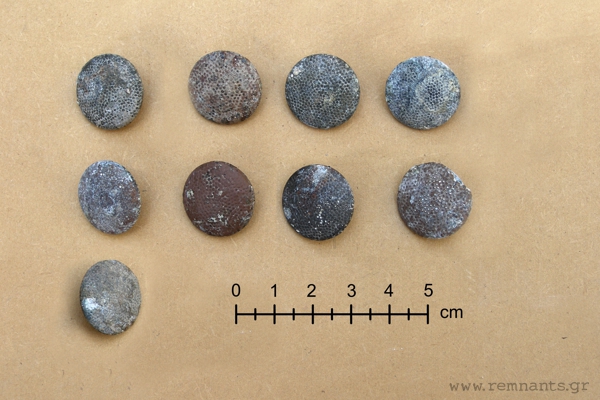 21mm “Pebbled” metal buttons
These are of the standard type used on German WWII tunics and overcoats. Their surface was granulated to avoid reflection.

They were made by aluminium, zing, iron and other alloys. Combat uniforms had painted buttons (usually grey-green or grey) while officers’ or walkout tunic buttons had a natural metal or silver finish.

A typical tunic should have a total of 11 (early variants) or 12 “Pebbled” buttons, depending of the model (4 for the pockets,2 smaller for shoulder straps and 5 or 6 for the front). Variants with 9 buttons existed, but were a late war development.

Presence of green colour denotes a low rank Wehrmacht combat uniform. The coarse red paint visible in some buttons is definitely not standard, and was clearly applied later. The original WWII paint was always fine in appliance. 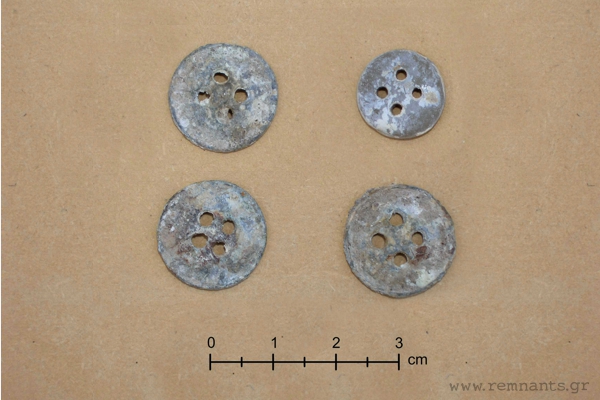 “Zing” 4 holed buttons
Those types were used for several German uniform items. They were made by cheep metal alloys and/or resign and had the tension to deform due to usage and time.

Their small numbers indicate that they are probably related to the interior of a tunic rather than a separate buttoned uniform item (e.g. shirt, trousers).

Zelthbahn 3 holed button
This type was used for the Zeltbahn, a piece of equipment made of water repellent material, used mostly as a rain cape and for multi-person shelter construction.

Buttons were usually made from aluminium, steel or zing and it was not uncommon practice for soldiers to use them in other uniforms items. 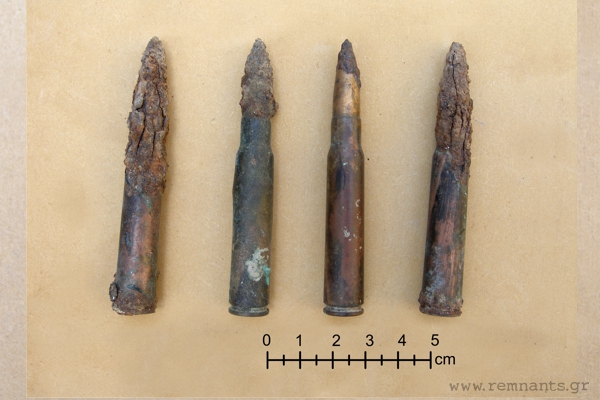 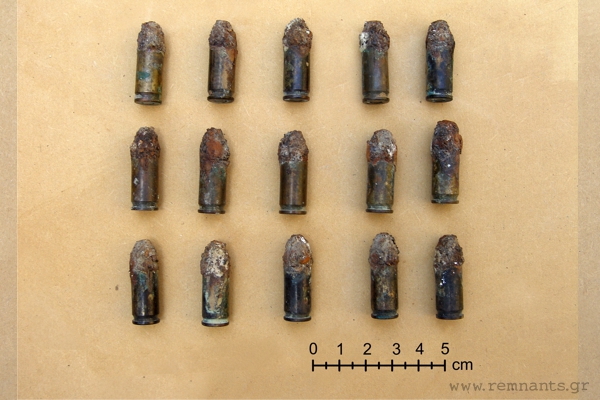 Cartridges in this collection are two of the most common types used on German WWII small fire arms, representing typical ammunition for rifles and pistols. For each type there were many subtypes (tracer, incendiary, explosive etc), which were identified by coloured markings on the base, body or tip of the cartridge. German WWII cartridges had in the basestamp a four-element code layout, indicating producer, case material, lot number and year of production.

7.92x57mm Cartridges
Often referred as 7.92mm Mauser, this cartridge was the standard ammunition for the majority of German made rifles (e.g. Mauser 98k), the major army machineguns (MG34, MG42), and some aircraft machineguns (e.g. MG15, MG40). At least 39 subtypes are known. Cartridges were usually used bound on clips of 5, or in large belts for machinegun use. A rifle soldier would normally carry in combat 150 rounds.

9×19mm Parabellum Cartridges
Its common name is 9mm Luger and was the ammunition for common types of German pistols (e.g. Mauser C96, Luger P08, Walther P38) and sub-machineguns (e.g. MP40). A typical German 9mm pistol holder would carry 16 rounds in 2 magazines, while a submachinegun user carried in combat over 200 rounds. 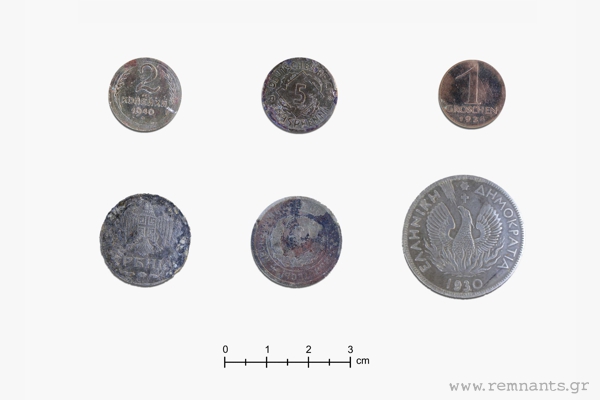 The nature of the find suggests that a German tunic, belonging  to a low rank member of the garrison, was buried in the yard, “abandoned” probably before 1943. All the pieces fit perfect as either contents or components of a tunic.

Of interest is the presence of the ribbon bar, which informs us that the wearer had east front service in 1941-42. It also provides a terminus post quem, which is May 1942, the date that the “East Medal” was introduced.

The presence of 1942 issue Losantin boxes suggests that the tunic was “abandoned” probably that year. It would be interesting to establish whether boxes were found sealed or not 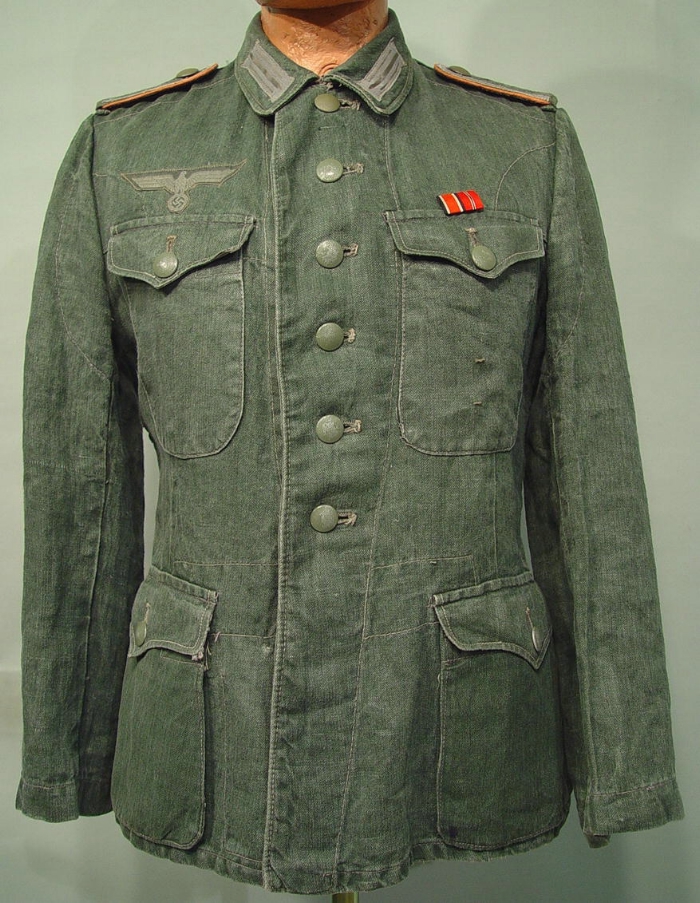 Some of the coins come from the USSR, confirming relation to East Front. Among others it’s easy to recognize Serbian, Austrian, German and Greek coins of the 30s and 40s.

Buttons are typical of German uniforms of the period. One would expect more (11-12) for a complete set. The presence of red paint on the buttons cannot be explained.

The 7.92mm bullets were of a “special” type, produced in lower numbers. The presence of 15 Parabellum 9mm rounds suggests that there may have been 2 sets of 8 cartridges, i.e. the content of 2 magazines for a common 9mm pistol.

Photographed base-stamps show dates no later than 1942. The remaining bases must be scanned for specific type identification. It is of interest to check the two digit codes for any post 1942 dates (number at 9 o’clock position, as shown in Figures 8, 10, 11).

According to Stavros opinion, which is perfectly logical, the tags and key come from a Villa or Taverna room, used by the German garrison in WWII. As for the parts of the pocket watch, it seems to be of an oriental origin. Both keys and watch are items one would normally carry inside a tunic.

More in this field: